Ada on the STM32WB

This is a new part family that merges an L series microcontroller with the BlueNRG-MS controller realized now as a single die. The microcontroller can run at 64Mhz has 1MB of flash and 256KB of ram. The wireless portion (I say wireless since its not limited to BT/BLE but also supports Thread and Zigbee), runs on a Cortex-M0+ controller and shares the top of the 1MB of flash for its (encrypted) FW. The M0's FW size seems about 256KB or so. The CM4F and CM0+ communicate by using some of the 256KB of ram as a mailbox. This is supported by HW (IPCC) that signals interrupts from one side to the other when data is ready. In the past, as on the SensorTile, the BlueNRG-MS was connected by SPI and that was the transport, now its done by mailbox and hw signalling.

Can we do it again? Can we get Ada running usefully on an WB series part with the added burden of the new control over BT/BLE? I will save the readers time here to say, yes, its possible! further, its working. Here is some interesting info, Ada's package system cleanly separates modules from one another so, I was able to smoothly migrate the BT work over from the SensorTile to the WB just as I had envisioned. The trick here was to recognize that ST was not going to re-invent the wheel here, they would use 99% of the working BlueNRG-MS stack over on the WB. That means, opcodes are the same, events are the same. All the data structures that had been done for those were a drop in. This saves me months of weekend dev time. Of course, there are some differences, these are relatively minor wrt the BT messaging.

I carp about SVD files a bunch. To me I think they are the key to getting Ada going on a a new target. ST has been good over the years at generating SVD files. Why should the WB be any different? Well, it is different. There is no SVD file on their website as of this writing. (odd since they released one for the complex STM32MP157 with hundreds of blocks). I need an SVD file so what are we going to do to get Ada going on the WB55? Well, the reference manual defines all the regs... maybe... well that's what I did I cut and paste into block txt files all the reg defns, bugs and all (yes there are loads of datasheet bugs). Once all the hw blocks were assembled I then hacked a Ruby script to convert them into xml fragments and assembled the whole shebang as the SVD file. Its part of the dir trees called out below. svd2ada is happy with the file and I have been using it smoothly for bringup and for my usual technique of using SVD files to parse raw GDB dumps back to ascii dotted format for easy diffing (see my blog entry on that: http://www.hrrzi.com/2017/07/arm-cortex-svd-files-lot-of-goodness.html  ).

An update on the SVD topic, Pierre Le Corre of ST pointed out the the STM32CubeIDE has as subdir where the SVD file can be found. Indeed its there along with all of the F and L series parts.

ST sells a nucleo board eval kit for the WB55. It has two boards in it. A nucleo board and a USB dongle. Out of the box they have a client server demo. The bigger board is the server and the dongle is a client. The dongle on a button press scans and connects to the server. Once connected, the button (SW1) toggles the blue LED on the other board. So, each can flip the led on the other one. SW2 on the bigger board changes the rate the radio refreshes. In this mode, the LED takes a little longer to toggle.

I crafted a workalike of the ST client that runs on the dongle. Here is the larger nucleo running STs server code communing with my Ada client on the dongle. 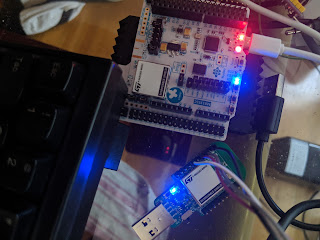 The Ada client performs all the functions as stated in the readme ST provides:

- The Peripheral device (BLE_p2pServer) starts advertising (during 1 minute), the green led blinks for each advertising event.
- The Central device (BLE_p2pClient) starts scanning when pressing the User button (SW1) on the USB Dongle board.
- BLE_p2pClient blue led becomes on.
- Scan req takes about 5 seconds. *
- Make sure BLE_p2pServer advertises, if not press reset button or switch off/on to restart advertising.
- Then, it automatically connects to the BLE_p2pServer.
- Blue led turns off and green led starts blinking as on the MB1355C. Connection is done.
- When pressing SW1 on a board, the blue led toggles on the other one.
- The SW1 button can be pressed independently on the GATT Client or on the GATT Server.
- When the server is located on a MB1355C, the connection interval can be modified from 50ms to 1s and vice-versa using SW2.
- The green led on the 2 boards blinks for each advertising event, it means quickly when 50ms and slowly when 1s.
- Passing from 50ms to 1s is instantaneous, but from 1s to 50ms takes around 10 seconds.
- The SW1 event, switch on/off blue led, depends on the connection Interval event.
- So the delay from SW1 action and blue led change is more or less fast.

* I should say the Ada client scans faster since it abandons the scan when it finds the server.

Order a WB55 nucleo board and get started with Ada running a BLE stack!

To flash the code to the USB dongle, openocd needs to be used. First there is a hookup: 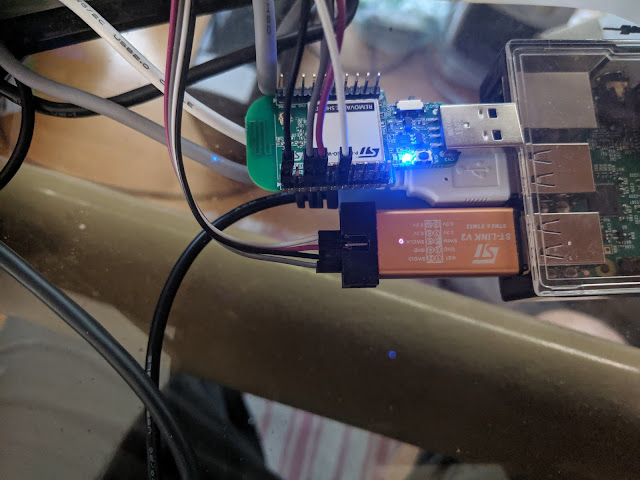 Four wires from the ST Link V2.0 over to the USB dongle. If you zoom in a bit you can id the wires that need to go where.

Next you need my version of openocd:

I built it on a RaspberryPi3 as so:

Add other --enable-xyz's if you have other targets not called out above.

Finally run it. I usually cd to the tcl dir:

This is a work in progress.. I plan to swap out the server on the larger nucleo board with an Ada version. Stay tuned.

Posted by Hedley Rainnie at 2:04 PM